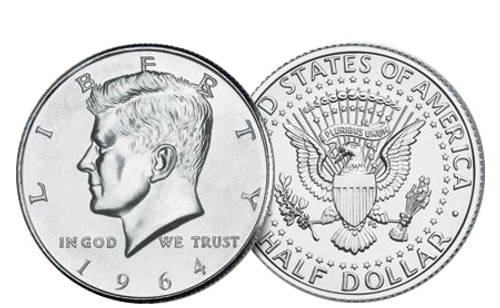 Don't miss your opportunity to own one of the most popular silver coins in U.S. history...the 1964 silver Kennedy Half Dollar. The first and only silver Kennedy Half Dollar issued for actual circulation.  Within days of President Kennedy's assassination members of Congress called on the U.S. Mint to design a coin honoring our fallen leader. Marching orders in hand, and with a focused determination, mint officials went to work. Many Americans, like children longing for Christmas, anxiously awaited the release of the monumental coin and once issued quick sell outs were the norm anywhere these historic coins were sold.

The fate of many 1964 Kennedy Half Dollars remains a mystery. Most never made it into circulation and there are no official records detailing the numbers melted for their precious silver content. In fact, finding them in pocket change, cash registers or even bank vaults is rare. Each coin offered here is in Brilliant Uncirculated condition...as beautiful today as they day they left the mint over 50 years ago. Don't miss out, order your coin today!

Issued from 1916 to 1947, these 90% silver half-dollars with the classic Liberty Walking design are

Now you can own a piece of American History...This 90% silver coin honors one of the most significan

EXCLUSIVE OFFER! Issued from 1916 to 1947, these 90% silver half-dollars with the classic Liberty W

Struck only between 1892-1915, the collectible Barber Half Dollars are aptly named after their desig