The ranks of coin collectors continuously grow from year to year and collectors often repeat the same questions. A very common question from years ago is starting to resurface as collectors are looking to complete their American Silver Eagle collections. Why am I missing the 2009 Proof Silver Eagle?

For those of you who may not know, The Mint has made the proof version of the American Silver Eagles every year since 1986... except 2009. Why is this? The short version of the story is the Mint was too overwhelmed to produce the proof silver that year. Of course it's way bigger than just that! To really understand the why it WASN'T MADE, you truly need to know the why they WERE MADE to begin with! Keep reading for the rest of the story. 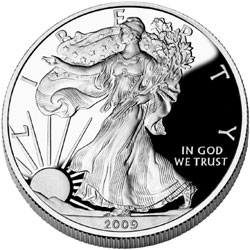 WHY DO SILVER EAGLES EXIST?

There is a misconception among most collectors of why the American Silver Eagles even exist. Most believe it was "just time" to have silver dollars again, some believe it was because of the anniversary of the Statue of Liberty, still others believe it was a plot to take over the world (take the tinfoil off of your head). The truth is far more simple... money. During the cold war the Government was stockpiling as much silver as possible for the Defense National Stockpile Center (maybe we should put the tinfoil back on after all!) but our growing national debt was spiraling out of control. President Reagan finally convinced Congress to produce Silver Eagles to battle our debt. The silver was to be purchased from our own stockpiles to balance the Federal budget. The decision was made to allocate 75% of our silver stockpile in order to produce the Silver Eagles. Great you say but what does this have to do with 2009? The wording. The Law stated the Mint had to produce coins in "quantities sufficient to meet public demand." In other words, the global recession taking place in 2009 had more people buying Silver Eagles than ever before. The Mint could not keep up to meet "sufficient quantities." To stay in compliance with the Law, something had to give... and it was the 2009 Proof and Burnished Silver Eagles.

We all know the public outcry was immediate and loud! Not to mention the hole in our collections that can never be filled. Then Mint Director Edmund Moy even provided testimony to the House Subcommittee on Domestic Monetary Policy and Technology about the public's outrage. Our voices were heard. In 2010 an amendment to the law was passed to allow not just "quantities" of coins but also "qualities" of coins to meet public demand. Collectors want their proof Silver Eagles... and now it looks like we'll get them! With all of the interest and the new Type 2 design, at least it looks like the new design of Silver Eagles won't have the collector hole like we have from The Missing 2009.