July 4th, 1776. Every citizen in the United States understands that we celebrate our Declaration of Independence to commemorate this day. We go to cook outs, set off fireworks, play games, and visit with family and friends. However, in 1776 it was a proclamation of a revolution and often ended with uncertainty, treason, and death. What we forget is that it would be years before all of the details were worked out and George Washington would be elected and declared our first president in 1789. The first federal building congress passed to build was the United Sates Mint and the first coins produced were in 1792. So, during all of those years, what did we use for money? What really was the first official coin of the United States?

However, before we get right to it, a little history is in order. In those years our fledgling nation was ran under the Continental Congress and the Congress of Confederation. There were almost immediate plans to build a mint and start a currency but it wasn't even determined what the denominations would be. There was talk of the dollar units or even making money using decimal coinage of 500 or even 1000 units. It wouldn't be until 1785 that the dollar was chosen and could be produced in is little as 1/200 of a unit called half cents.

During this time most of the coins circulating were foreign coins and the most common was the Spanish milled dollar or more commonly known as the "Piece of Eight." Once the final decision was made to go with the dollar as money, foreign coins were clipped down or plugged to bring to dollar standards! The Piece of Eight would officially have a $1 denomination but there was still not a United States produced coin. 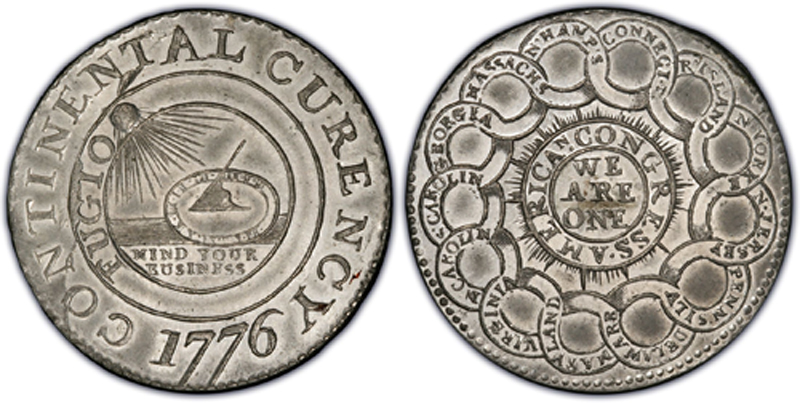 So, to bring this all to and end, the first formally approved coin made was a copper coin known as the Fugio Copper! Based on the design of the Continental Congress pattern and nicknamed "Franklin's Cent" since Ben Franklin was very involved in it's production. This coin was privately struck under government contract in New Haven, Connecticut. 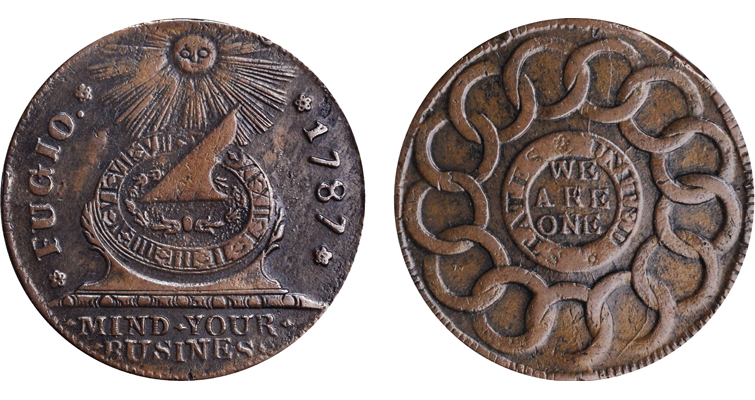 As always, the details matter. The Word "Fugio" is Latin for "time flies," and the poignant statement of MIND YOUR BUSINESS. on the reverse there are 13 interlocking rings representing the 13 colonies and a simple message in the middle "We Are One." All of this wording has been accredited to Benjamin Franklin. The coins themselves were released in 1787, five years before the original U.S Mint was built. The original contract called for 300 tons of copper to be turned into coinage. No one really knows if this was fulfilled or has a real mintage figure. Over the course of more than 200 hundred years, only a few thousand are known to exist today. Regardless, they are very collectible and the official first coin of the United States. Now you know. Happy collecting!