Many of you most likely remember the 1933 $20 Saint-Gaudens from when it made national news back in 2002. Almost two decades ago, this famous coin held the title of the most expensive single coin ever sold- $7.59 million. The story behind its existence reads like a mystery novel. This 1933 $20 gold coin resurfaced for auction on June 8th and once again holds the title. This time it realized $18.87 million, taking the world-record for the most expensive coin! Not bad for a coin that wasn't supposed to exist. 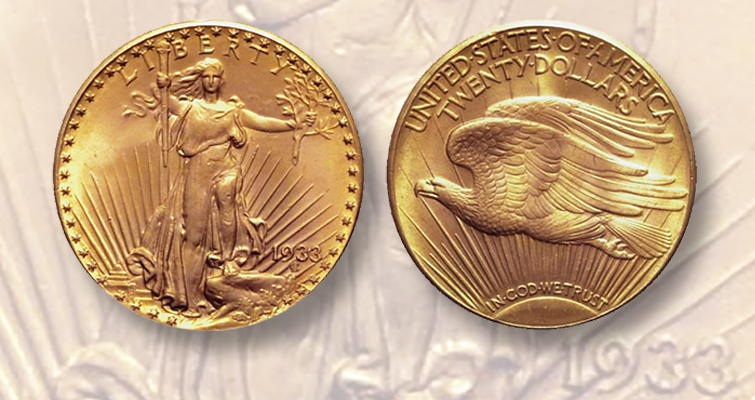 Due to the depression and the hoarding of currency, circulating gold currency was recalled all over the world. President Franklin Roosevelt issued the recall order in the United States in April of 1933. When the executive order was issued, the Mint had already struck 445,500 of the $20 Double Eagle Saint-Gaudens gold coins. However, they had not yet left the Philadelphia mint for circulation. All but two of the $20 gold coins were accounted for and destined to be melted down. The two remaining coins were set aside to be sent to the Smithsonian Museum. This is where the story should end... of course it did not!

As early as 1937, a small number of 1933 $20 gold pieces began showing up in private sells. How was this possible? The Secret Service was called in to investigate. Their investigation showed that a few Mint employees had taken some of the 1933 coins out before they were melted. Naturally, the Secret Service determined the coins were stolen from the Mint and therefore were illegal to own. All of the 1933 coins they could track down were confiscated. Some were never recovered.

One such coin was sold to King Farouk of Egypt. Farouk had one of the most extensive coin collections in the world and his 1933 $20 Saint-Gaudens was a prized coin in his collection. Farouk was able to secure an export license from the U.S. Treasury Department in 1944, this allowed him to legally remove the gold piece from America take it back to his home country. In 1952, after a coup in Egypt, Farouk was removed from power and his Palace Collection of coins was to be auctioned by Sotheby's. When the U.S. Department of Treasury found out the 1933 was part of the auction they requested for the 1933 Double Eagle to be withdrawn. It was unseen for the next 42 years.

The story does not end there! In 1996, the Secret Service found out about a private sell of Farouk's 1933 $20 happening in New York. Their investigation led them to a guest room at the Waldorf-Astoria hotel. Storming into the room, they recovered the $20 gold and placed two coin dealers under criminal charges. Upon recovery, the coin itself was stored in a vault at the Secret Service New York offices on the ninth floor of Tower 2 of the World Trade Center.

After five years of civil litigation a settlement was reached in 2001 and the coin was transported to Fort Knox Gold Bullion Depository in Kentucky. If this had not happened this notorious coin would have been destroyed in the terrorist attacks on September 11, 2001.

So what would happen now? Was this coin destined to be melted like the original coins? Once the coin was determined to be the actual Farouk example it was finally cleared by the Treasury Department as the only legal to own 1933 $20 Double Eagle. The auction was set in 2002 and purchased by shoe designer Stuart Weitzman for $7.59 million. It was in his collection for 19 years but he allowed to be shown at several venues.

In the spring of 2021 the coin was encapsulated by Professional Coin Grading Service (PCGS) and graded in an MS65 condition. On June 8th of 2021 it would be auctioned once again. This time realizing $18.87 million and securing its place as the most expensive coin ever! It was even sold with the unique “Certificate of Monetization” signed by Mint Director Henrietta Holsman Fore back on July 30, 2002. This specially prepared certificate by the Bureau of Engraving and Printing accompanied the sale showing the legality of the 1933 $20 Double Eagle. Over the years, other 1933 Double Eagles have been found and confiscated making this example so unique. An amazing coin with an incredible story. It really makes you wonder where the next chapter of this story will take us! 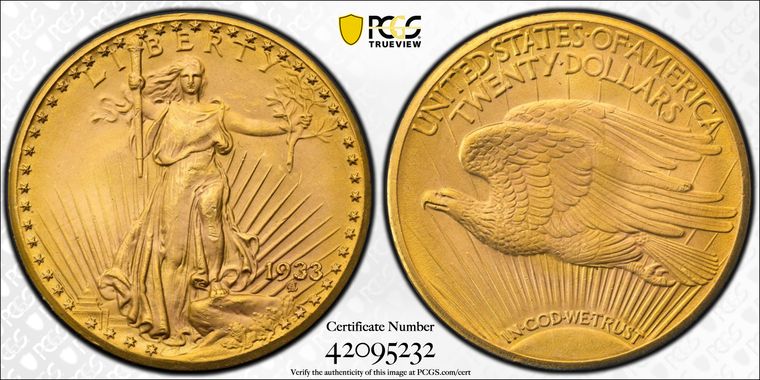