Spoken by Woodrow Wilson in 1917, the United States would enter WWI on April 6th that year. Looking back through history it is unfortunate that these words would not turn out to be true. When our troops returned, and the world began to recover, collectors and numismatists began to lobby for a coin to commemorate the end of the World War. It would take three years to happen... the result was the 1921 Peace Silver Dollar. 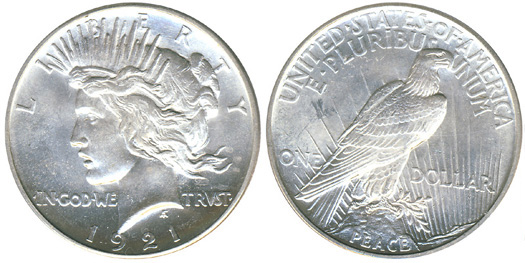 The much loved Peace Silver Dollars almost did not make it into circulation. When the idea of bringing out a coin to commemorate the end of WWI, it was even suggested for it to be a single year issue. One hundred years later, all of us collectors are happy that was never the case.

However, the Mint did not make their final decision until 1921 to bring this coin into production. To make it even more difficult the Mint decided to hold a design contest to determine how the coin should look... in November of 1921! This is a much larger problem than it may sound like on the surface. The mint can only strike coins for each year during the calendar year. They left themselves only two months to complete the job!

Ultimately, the design we all know so well was the result of sculptor Anthony de Francisci. One of his famous design elements is often misunderstood. Looking closely at the motto In God We Trust, you will notice the V in Trvst. Not a mistake on his or the mint's part, is was purposefully put there to honor our Victory in WWI. Another feature some collectors do not realize is about the high relief of the coin. The relief is the design that comes off of the surface of the coin. So Lady Liberty and the Eagle come up higher than other silver dollars, even more so than the American Silver Eagles. With the difficulty of striking high relief coins, 1921 was the only dated year to fully circulate. To be fair, there were a very limited number struck early in 1922 as well. Most collectors view 1921 as the only attainable high relief still today. Naturally, the name of the coin itself comes from the word PEACE below the eagle.

With the Mint's shortened schedule, just over 1 million coins were produced for circulation. That's not a very high number for a circulating coin. There was a good reason. Since they had to strike the coins during the calendar year, they had not left themselves much time... less than one week!

Lastly, one of the lesser known Peace Dollar facts was the release date. You may have guessed already but the 1921 Peace Silver Dollar was released in January of 1922! So the next time you see the beautiful 1921 Peace Dollar or the new 2021 Peace Dollars, you now know the full story. Happy collecting.