Is there a substitute for perfection?. It is more and more common for every coin the Mint releases to go straight to the grading services for certification. So much so, even older coins are looked down upon if they are not a perfect Mint State 70 condition! We all know the value of a coin is heavily influenced by condition. The reason condition plays such a heavy factor is that it represents RARITY. Now before I get ahead of myself, let's make sure we're all on the same page.

The two best (and rightfully so) grading services are Numismatic Guaranty Corporation (NGC) and Professional Coin Grading Service (PCGS). NGC has certified more modern coins so I will use their current figures when needed. Both of these services began in the mid 1980's and primarily graded and authenticated antique coins. The shift to certifying modern coins did not take off until the early 2000's so we now see more and more modern coins certified every year. Both of these services use a form of the Sheldon Rate Scale that grades a coin from 1 to 70 with 70 representing a perfect coin. 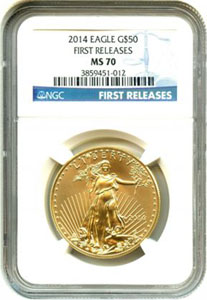 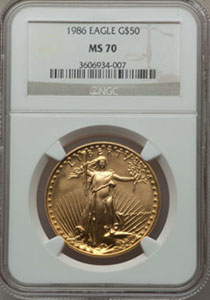 So back to our question at hand! The U.S. minted bullion Silver and Gold American Eagle coins are some of the most popular and certified coins in the U.S. today and a perfect example of how the condition of the coin really is a representation of rarity. It seems like common sense that the more rare an item is, the more costly that item will be. Nowadays, rarity means more than just the mintage figure.

Roman numeral dated American Gold Eagles show a great example of rarity by condition. Let's take the high minted year of 1986 and compare it to a fairly rare year like 2014. For those of you who hate math, skip to the end of this paragraph! In 2014 the mint produced 1,095,000 bullion Gold Eagles and just 17,101 graded out in a perfect MS70 condition, roughly 1.5% of production! One and half percent is not very many coins to reach perfection. However, in 1986 the mint made 3,600,856 bullion Gold Eagles with only 2781 coins being reported as perfect! That is an incredibly rare percentage of .077! Less than 1 percent.

As you can see, the 2014 coins are 3 times as rare in raw mintage but many more of the new coins certified in Mint State 70 condition. It also means that perfect MS70 1986 coins are at least 3 times more costly than their 2014 counterparts! Admittedly, there is a growing trend of collectors that could be considered coin snobs and look down their nose at lower grades but perfection comes at a price. All collectors ultimately buy coins for their own reasons and condition is only one factor but is there a substitute for perfection? Only one, money.